Wooden Boats Forever! How to Bring an Older Snipe to Modern Specs

The principle problem facing the majority of today's sailors is when does sailing become monotonous? This happens when the way to have a highly competitive boat is that you must buy one available on the current market.

Observing this trend, we understand really why there's a need for wood Snipes, radically changing our form of thinking and sailing.

When I started sailing Snipes years ago here in Argentina the boats that dominated the majority of regattas were constructed of wood because the boats built nationally of fiberglass were distant from those that were competitive.

For these reasons I bought a wooden boat, it being made of the same construction and type of wood of those that had been constantly winning. The boat needed many changes to be competitive and I had many questions, commencing with the remodeling, to obtain a winning machine.

Before beginning to work on the boat, I spent a lot of time talking with my brother, paper in hand, in order to fine tune the things we wanted to change: deck, interior, air tanks, reinforcements, form of the hull, etc.

I'll clarify that the total time I spent to make the modifications took approximately 45 days, working on my free time and during the weekends.

The principle changes made in our boat were the following:

Deck
The form of the deck was taken from those designed by Ricardo Fabini of Uruguay, a very good shape, with the difference that in the stern, our deck was continuing flat while Fabini's was rounded. The deck was built of a Brazilian wood, "Kiri", I Omm in thickness, which is very light. The Kiri is lined on one of the sides by a "cedro" cap, which gives it a beautiful finish. In the curve of the deck, we proceeded to reduce it because with this kind of boat, it would have been overdoing it, and we wanted to obtain a meaningful weight reduction in the bow of the boat. 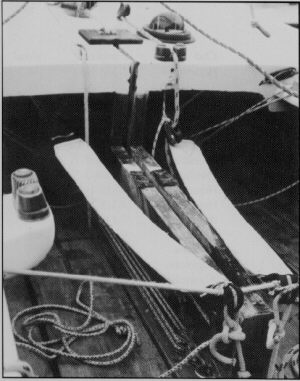 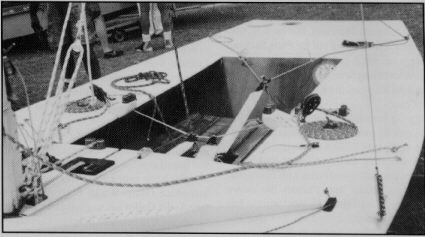 At the mast partner hole, just before the mast step, coinciding with a internal support of the deck, we put a framework that accompanied the interior form of the hull, a wall of the plywood, increasing the stiffness of thejoint and avoiding movement that could happen when the boat capsizes and the cockpit fills with water. Again, we used the Kiri plywood, lined with Cedro, but this time 6mm of thickness.

On the original hull, the cockpit floor was high because it gave reinforcement to the hull. We decided to leave this as it was, adding some cradles in order to align horizontally with the future floor of the cockpit. With this we achieved a very functional boat, especially sailing in high winds, giving the boat a cockpit about the same depth of a Laser. This was influenced by sailing in high winds, permitting us to heel and hike more quickly than other boats with deeper cockpits.

In the stern, the reinforcement of the deck became flat, instead of curved and we also reduced the weight. The stern air tank was really big which reduced the length of the cockpit. We again used Kiri plywood lined with Cedro.

The deck bands (top of the deck) were broad, which, when capsized, did not allow the water to enter the boat. It was easy to right it and to sail again. Again, this was built of Cedro plywood, which was actually heavier, but much stronger, able to hold our weight when sailing and tacking. The increase in weight in that area did not affect the moment of inertia.

The deck and all the accessories were glued with epoxy, which eliminated screws from the previous construction, representing approximately 8 kgs of badly distributed weight.

We reinforced the centerboard case, eliminating any possible movement, and short- ened it's length to give more space in thecockpit.

Meanwhile, as the days passed, it seemed this project was converting me into a real boat builder, and all the time I was thinking of details of how to gain more speed.

What I have learned and the things we shouldn't forget are:

The fundamental advantage of a wood boat is that they are actually more rigid than fiber- glass boats and we are able to play with weight distribution which allows us to distribute the weight better. With this we will achieve:

When our project was completed, we had created a rigid boat that was comfortable, agile and fast, and best of all we had saved 25 kgs, below minimum weight. Of those 25 kgs., we were able to re-use 15kg to reinforce certain areas and the other 10 kgs were able to be distributed to achieve the proper moment of inertia in the first measurement after re-construction. 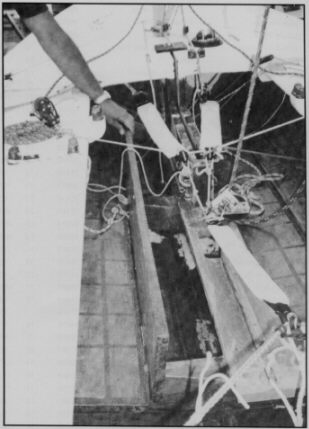 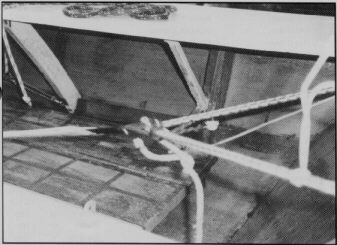 With our new boat, her debut sail allowed us to qualify to represent Argentina in the 1992 Western Hemispheres. I was unable to sail for the next 4 years, but when I returned, I finished I" in the South American Championships in 1997 in this boat, with a total of 78 competitors. This is the reason why I still support that wooden boats, well prepared, can win in the end.

See you on the water.