The Idea Forms - So there we were, Thursday night, awards dinner of the masters, with a day off the following day before we could sail the Atlanta Halloween regatta on the weekend. The biggest thing on our minds was 'what is our costume going to be for the Halloween party?' We thought about it all night and as time went on the ideas got wackier. Eventually we decided something big, real big, big enough that seven people could be part of the costume. How about a full size cardboard Snipe?

We thought about it and fortunately it was late and nothing was seeming impossible so we began to ask the locals if they had any cardboard at their house. By morning when we finally made it out of bed and down to our boat, there was a mountain of cardboard garbage next to our boat and the early birds were wondering who had begun the trash heap. We realized that we were committed. With a quick trip to the local supermarket, we found the cardboard recycling bin out back and got plenty more materials. Next we spent $20 and cleaned out the local drugstore of all of their packing tape. 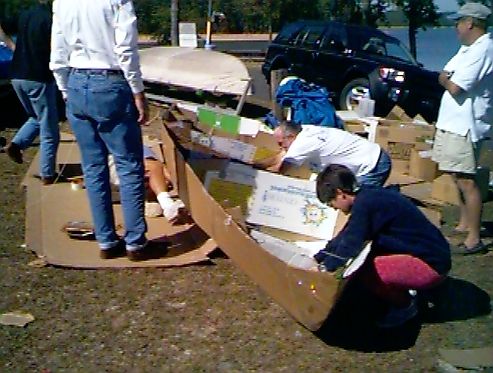 Tom Sawyer'd - Now that we have this great idea and all of this cardboard and only a few people for the costume, we realized that we would need more help to complete this project. Around the parking lot we went looking for friends that had no costume. What do you think? Wouldn't this be fun? The next step was harder and we lured more than one person over with " do you have another knife or Hacksaw?" they would often bring the tool and then start helping. 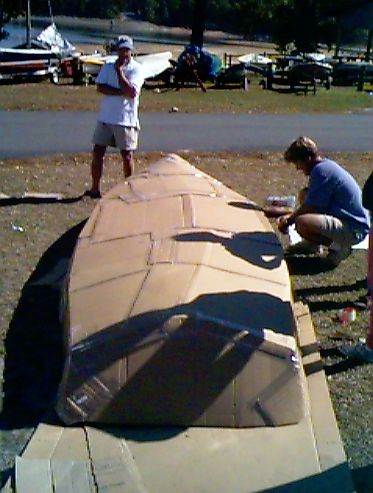 Measure Once, Cut Twice - We unrigged our Snipe, flipped it upside down and put on the bottom cover. The process became: slap on a piece of cardboard, cut shaping slits and then tape the pieces together. As more pieces went on, the boat took shape and we got more weird looks from people in the parking lot. Eventually the hull was formed, the sheer line was cut smooth and the hull was removed from the plug. We then wondered how we could keep this flimsy structure together. We wished for a big stapler but that could not be found. Fortunately our rocket scientist, Alex Pline, came through. Frames built of disassembled cardboard boxes were hand sewn to the hull. Oh boy, that was a lot of work. Sherry Eldridge led the charge and six or more frames were added and the structure was pretty stable. After another trip to the store by Jim Richter for more tape, we were able to tape on the deck.

Six holes were cut through the deck and the hull for people placement and the costume was ready to try on. Not too bad, but some of the holes had to be modified so that people could fit better. And with the addition of a separate rudder costume built by the master board craftsman, Dave Carroll. We were ready.

How do you hide a full size Snipe costume in a boatyard? Easy, we covered the darn thing with our bottom cover (it fit perfectly) and turned the costume upside down in an out of the way area of the parking lot. No one knew. 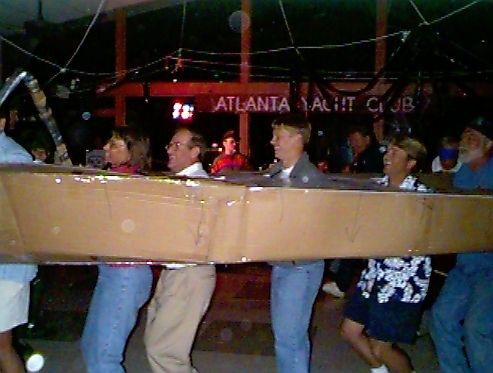 The Contest - We entered the club with a perfect roll tack and Jerry Thomson steering in the rudder costume. You never realize just how big a Snipe is until you pull one out on the dance floor. We cleared the dance floor and were stuck. With six people in a costume, there were no leaders and we never knew which way we were about to turn. Several times we slid towards walls and into people- we forgot a centerboard. In the end the grand prize went to other more original costumes and the paper Snipe was left outside at the top of a big hill. Next thing I know the Rocket Scientist thinks it will make a Great toboggan and decides to take it for a ride. Fortunately it didn't go very fast and they didn't hit any trees. Soon afterwards the costume disappeared into the trees with a bunch of kids towing it, and we never saw it again. Anyone know where my costume is?

For more about the Halloween Regatta East, see the Results Page.